Was an alien spotted near where I live?

The other day I was searching through Youtube looking for "alien caught on camera" videos (I actually do look for that stuff when I'm bored) one thing lead to another and I eventually came across this article about an alleged alien encounter that occurred not only in my home town... but also about only a mile or so from my home (although it happened over two years ago and nothing like this has occurred near here ever since).

Suffice to say that if I believed that this close encounter of the third kind actually did occurred (read about it here) I might be scared out of my mind. Of course I don't believe it. I believe it to be a hoax, and I'll explain why:

First, lets examine the description of the "alien" by the eye witness:

Now that's a very detailed description of this creature. What detail that was not given was how far away this person was from the creature, or where exactly was this creature was (I'm well aware of the area and how it looks like having lived here all my life and driven past this place hundreds of times, so I can tell you after reading the report that the person gave is that either the person is a local as well, or has passed through that section of road enough times to remember what it looks like)? Was the creature on the hill in the wooded area, or in the middle of the road, or across the street at the little pond next to the apartments that are at that intersection, or on the side of the road?

Also it was at 2:00 PM in the summer time, and according to the report given, it states that:

So there are atleast nine other eye witnesses to this incident, and probably a lot more than that, yet this is the only report about this alleged incident that I can find, and no one there (including the person whom made this report) had enough sense to take a picture of this creature? In fact why hasn't more people come forward and said that they saw something? I can understand maybe a few people not wanting to have anything to do with this incident, but certainly there must have been atleast more that one person willing to come forward and tell what they saw?

Now there is actually one alleged picture of this creature, and it was taken at night via a trail camera: 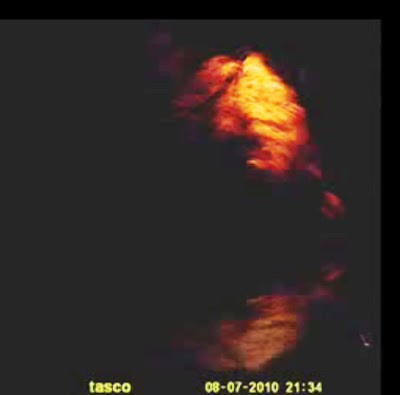 Now besides the fact that this photo is blurry and really doesn't show anything (and before you point out that the year is wrong that really is not that significant as the person who set up this camera could have set the year wrong) there is no way of knowing if this photo really is from Roanoke, or from the area which is being talked about? This is the only photo provided and as far as I'm concerned it provides no proof that this incident even occurred at all, or that it's in any way connected with it.

Another thing that makes me believe that this is a hoax are the last to sentences of this report:
My question isn't why wasn't this in the news, but why didn't the person whom made this report tell the local news stations themselves? I would have if I thought it was real and not just a hoax, and that there were multiple eye witnesses, and that it was in the middle of the day time...

In conclusion I believe this to be a hoax. While the details of the creature is very descriptive, there's very little other information (such as where exactly the creature was when the person first spotted it, and how far away the person believes that they were from the creature). This, combined with the fact that no one else has come forward to back up this story, nor did the person themselves report this to the news, and the lack of a follow-up interview the try to get more information (and a note in the report did state that the person did provide full contact information) has lead me to conclude that this is a hoax.
Posted by The Locke at 1:06 PM