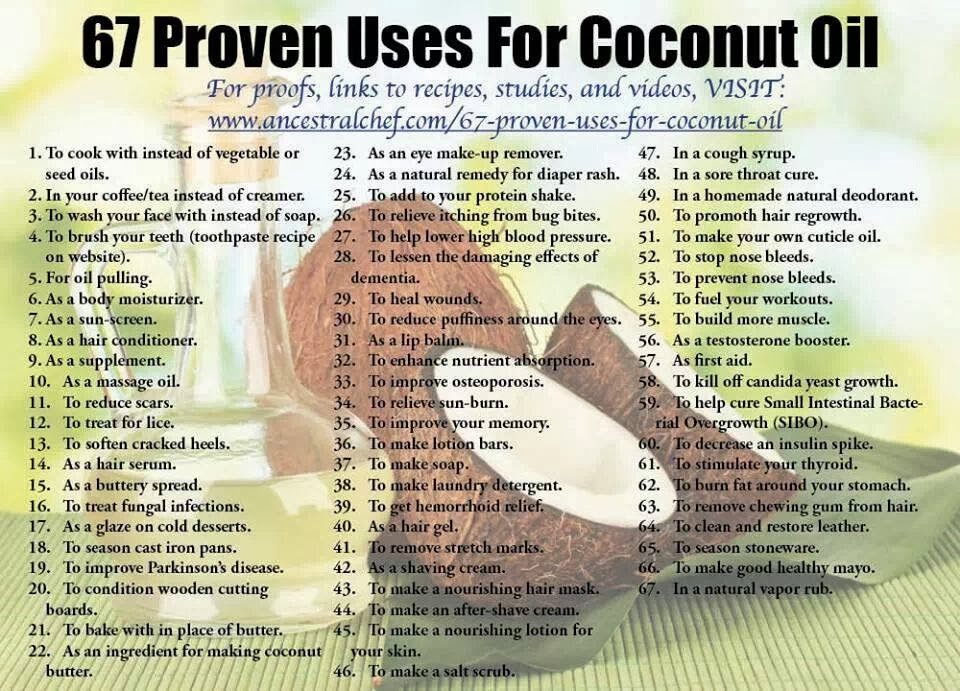 Recently I came across this picture that were making all of these claims about coconut oil (67 claims to be exact).

Now normal when I see something like this and it has the word "Proven" in the title, I automatically assume that most or all of it is just a bunch of BS.

But I decided to give these claims the benefit of the doubt and examine all of them to see if there is any truth behind them.

1. To cook with instead of vegetable or seed oils.

This one is true. You can cook with it, but it's advised by many health organizations not to, or not to use to much due to it's high amount of saturated fat.

2. In your coffee/tea instead of creamer.

Sure. Infact non-dairy creamers are often made out of coconut oil.

3. To wash your face with instead of soap.

Yes, this is true. Also most hard soaps are made with coconut oils.

4. To brush your teeth with.

You could. There's nothing dangerous about coconut oil (except maybe increasing your chance of having a heart attack if you eat to much of it) but I would stick with good old fashion (and proven) toothpaste.

My advice is that you should ask your dentist first before using coconut oil toothpaste and see what they have to say.

Yes, you can use coconut oil for this, although oil pulling itself hardly does anything and only really decreases the amount of tooth decaying bacteria in your mouth. Mouthwash is far more effective to use, and takes less time. Vodka also works to, and unlike mouthwash, you can actually swallow it!

6. As a body moisturizer.

Yes, this is true.

Lets go back to #1 on the list, shall we. It's used as a cooking oil. What do you think it's going to do to you?

For those who answered incorrectly, it's going to cook you!

8. As a hair conditioner.

It does reduce protein loss in hair, so yes you could use it as a hair conditioner.

For what? That's kind of vague. Plus considering how high coconut oil is in saturated fat, I wouldn't use it as a food supplement.

You can use it for that.

It helps with dry skin, and it might help acne scars, but scars from a cut it's not going to help.

Yes, you can use it for this.

Yes, this is another thing you can use it for.

Sure you can... if you don't mind increasing your risk of having a heart attack in a few years.

No, you use use anti-fungal medication to treat fungal infections. Coconut oil might help with the dry skin, but that's it.

Yes you can, but again most health experts would not recommend it.

Yes, but it's better to use healthier types of oils.

There are a lot of claims going around the internet about coconut oil and Parkinson's disease, and there really hasn't been a lot of research into this, but so far it's believed that the "successes" you hear about is really just a bunch of anecdotal evidence, and there is not enough information to confirm if coconut oil can help with Parkinson's. Regardless of this more research is said to be needed.

You could, but considering how slick the stuff is, I wouldn't.

You could, but it's actually probably better to use butter.

22. As an ingredient for making coconut butter.

Since coconut oil is used in soaps, it could probably be used as an eye make-up remover. It probably depends on what type of make-up you use with how effective it will be.

24. As a natural remedy for diaper rash.

Probably not, since diaper rash is a result of moisture, and coconut oil is used to treat dry skin.

26. To relieve itching from bug bites.

If the bug bite causes dryness of the skin it might help, but other than that it will just be a placebo.

NO!!! It will do the opposite.

28. To lessen the damaging effects of dementia.

Much like with Parkinson's disease there are claim that coconut oil helps with dementia, but that those claims appear to be anecdotal evidence rather than real evidence, but research into these claims are still needed.

30. To reduce puffiness around the eyes.

Probably not. The best way to reduce puffiness is a change in diet.

No, it does not do this.

Osteoporosis is a bone disease, and coconut oil does nothing for your bones. Infact considering how much saturated fat is in coconut oil it's probably better not to consume the stuff if you have osteoporosis.

No, it won't help. The best thing to do is to either take lots of cold showers, or use lotions with aloe vera, or wait it out.

35. To improve your memory.

If it does, or you think it does, then it's probably the result of whats called the "placebo effect" and has nothing to do with the coconut oil.

Yes. Infact most lotion bars are made out of a certain amount of coconut oil.

Most hard soaps are already made out of coconut oil. It's a key ingredient in the manufacturing of hard soaps.

You could probably try it. The worst thing that could happen is that your clothes don't come out clean.

39. To get hemorrhoid relief.

I'll forgo the gross details about what hemorrhoids are and just tell you that it won't.

All studies into this have found no evidence that any oils or creams can reduce or remove stretch marks.

You could, but I would go with good old fashion shaving cream.

43. To make a nourishing hair mask.

Yes, you can use it for that.

Yeah, it can be used for that

45. To make a nourishing lotion for your skin.

Yes, again you can use it for that.

No, coconut oil does not help coughs.

It can't cure sore throats either. It's better to just eat ice cream, and probably healthier too.

49. In a homemade natural deodorant.

You could try it if you want, but it's probably not going to work since coconut oil doesn't actually absorb sweat. Infact it might actually make it worst, or at the very least leave you smelling like stink and coconuts.

I'm assuming the person who wrote this actually meant to say "promote", and no it doesn't, otherwise it would be the main ingredient in Rogaine.

You could try it. Even if it doesn't do any good the only harm you did was waste your money.

No, tissues or bags of ice do that.

Considering it's full of saturated fat it will probably do the opposite, and maybe give you a heart attack while you're working out.

Protein and exercise does that, not something with lots of saturated fat.

56. As a testosterone booster.

No, and any type of natural product that claims to do this is BS.

For what? Dry skin. That's pretty much all it's good for for the human body.

58. To kill off candida yeast growth.

No, a yeast growth is a fungal infection and you need anti-fungal medicine to treat that.

No, you need antibiotics to treat that.

60. To decrease an insulin spike.

Probably better not to. The best thing to do is to drink juice and eat dried fruits.

61. To stimulate your thyroid.

62. To remove chewing gum from hair.

Pretty much the only way to remove chewing gum from hair is to cut it out, but go ahead and try it if you want to.

63. To burn fat around your stomach.

Considering coconut oil is mostly saturated fat, it's probably going to add to the fat around your stomach.

64. To clean and restore leather.

Leather oil would work better, but you could always try it.

You can, but it's not recommended, see #1 for the reason why.

There's lots of ways to make good healthy mayo. Using coconut oil is not one of them.

You could try it, but at best it would probably just be placebo effect.

In the end I have to conclude that is just classic food woo and alternative medicine BS. While some of what is claimed will work and is actually good for you, the rest is just stuff that either won't work but is harmless, or is actually bad for your health, and in a few claims can give false hope in improving your health, especially with certain serious medical conditions.

When you see stuff like this on the internet it's best just to ignore it.
Posted by The Locke at 10:52 PM