Obama ordered $1 billion worth of disposable coffins for use in FEMA camps? More BS fear mongering.

Reblogged from Is that a FEMA Camp?

Recently the old FEMA camp myth has once again reared it's ugly head around internet, this time making it appear that President Obama has ordered $1,000,000,000 worth of "disposable coffins", as you can clearly see from this screen shot below: 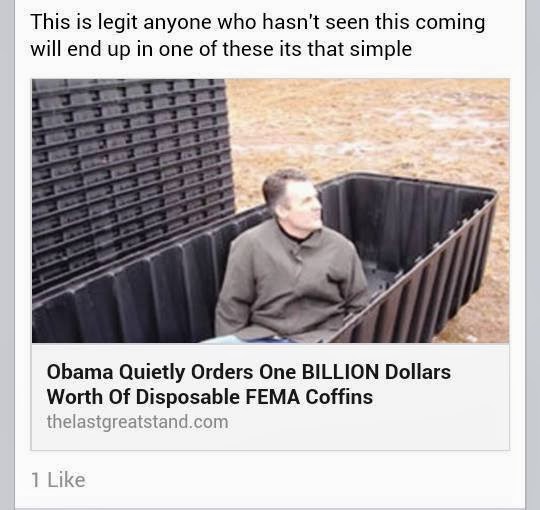 And from this article here.

When I was reading the article one of the first things that clued me in that this was just a bunch of BS and anti-government fear mongering were the pictures.

All of these pictures have been spreading around the internet for years now in various conspiracy theorist websites and forums.

Despite what the website wants you to believe, these pictures are actually pretty old. Infact they've been around since the George W. Bush administration, as have these claims.

While some coffin liners are bought by the government for things like military funerals, most of these purchases are made by funeral home to be used in private funerals.

The second thing I noticed about the article was the total lack of any references to back up all the claims made. All there was were some old pictures, an old video from 2 1/2 years ago that shows nothing but a few documents that means nothing and also has no links to the documents that are mentioned, and some ignorant people who clearly do not know that a coffin goes inside a coffin liner, and also makes up some outrageous claims without any sort of documents or evidence to back up these claims.

The fact is that there is nothing new about this story. This type of "story" has been floating around in one form or another for years and predates President Obama.

President Obama didn't order $1,000,000,000 worth of coffins, and Marshall Law is not about about to be implemented. All this is is more classic fear mongering being promoted by people who are very paranoid, or who hate the government, or (usually) both.
Posted by The Locke at 11:18 PM