Reposted from my other blog site Is that a FEMA Camp?

Recently on a Facebook skeptics group that I belong to someone posted a very "curious" looking photo, along with the commentary by the person whom posted photo the somewhere else on Facebook: 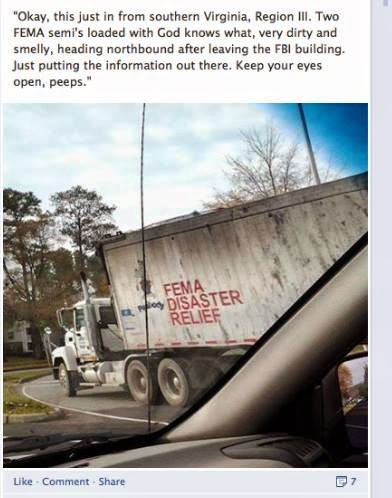 Now the first thing that came to my mind when I saw that photo was, "Wow... that trailer needs a good wash."

All joking aside ofcourse what really came to my mind was that the words on the truck looked like it was put on there via digital photo manipulation (i.e. photoshopped) and even if it wasn't, then so what?

Now my first argument for why it is photoshopped is because of another photo that looks almost exactly like the first one provided to me via Illuminutti.com:

Now clearly the second picture is photoshopped, and to be all honest it's not even that good of a photoshop job either.

Ofcourse just because the second photo has clearly been digitally manipulated, I have to admit that it does not mean that the first photo has been digitally manipulated as well. If you look closely at the bottom words "FEMA DISASTER RELIEF" that while the font style used for the letters are similar to the ones on the top, they are infact different.

Now another reason why I think the photo has been digitally manipulated is because of the trailer itself.

Besides just being in need of a good wash, it is clearly a used trailer due to the fact that there is a company logo right next to "FEMA DISASTER RELIEF", as well as a logo on the truck that is pulling the trailer.

So if this photo was real, what it would tell me isn't that FEMA is planning on "something" evil, it's that they're moving a trailer from one location to another to another, probably for some bureaucratic reasons, or it's being driven around just to make sure that everything is okay with it and the truck that's pulling it (and before you point out that the person claims that it's coming from a FBI building in Virginia I should like to point out that I don't take such claims seriously unless I have more proof that it really did come from a FBI building in Virginia).

Also, if the photo is real then it tells me is that FEMA is pretty underfunded if the only big rigs they can afford to buy are used and can't be washed every so often due to funding...

Now this brings me to another reason why I'm pretty sure the photo was photoshopped, that being that the government does not buy used stuff (with the exception of law enforcement buying used vehicles for undercover purposes). Even if the government did infact buy used vehicles, they would have atleast have given it a new paint job, and have put FEMA's actual logo on it rather than in big red words "FEMA DISASTER RELIEF".

Also, there is one more thing about the photo that has lead me to believe that it is fake, and that being the comment of the person themselves.

The comment made on the photo says that it's heading north after "leaving" the FBI building in Virginia. My question which one?


The obvious answer would ofcourse be Quantico, which is the location of both the FBI Academy and the FBI Laboratory. But thing about all of this (besides the fact that the person making the comment might have been mislead about where the truck is coming from and going to, or is just outright lying) is why would the FBI employ FEMA to do something that it itself could do? More importantly if the FBI was trying to do something secretive then why wouldn't it use either a blank vehicle, or a vehicle that has a name on it other than the name of another government agency on it in such clear, bold letters?

All the evidence put together has lead me to concluded that the photo is fake, and that either it was created for the purpose of fooling conspiracy theorists and having a good laugh at their gullibility, or by a conspiracy theorist whom wished to make his or her claims about police state conspiracy theories seem more legit.
Posted by The Locke at 6:35 PM