Anti-Vaccination pics should come with a disclaimer... 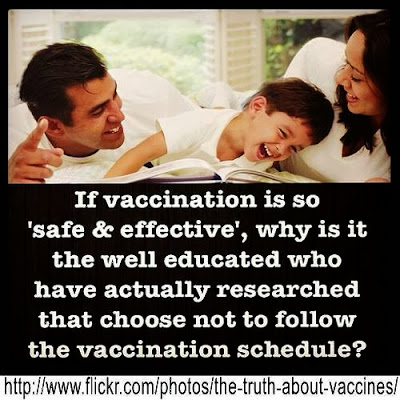 Now ofcourse anyone who is either a skeptic or a medical professional can clearly see why this picture is being mocked and criticized, but for those who don't I'll explain why:

Also, it's criticized because it gives the impression that people who advise against vaccination are themselves well educated, which is often not the truth and that in reality they are actually to dumb to realize that they don't know anything about vaccines other than what they've been told (or scared into) by the anti-vaccination movement. Even those that really are well educated have either just been fooled by the claims of the anti-vaccination movement into believing that vaccines are dangerous, or are just lying about their beliefs for reasons that are their own (usually because they don't want to admit that they are wrong).

If pictures like this were truly honest they would contain a disclaimer at the bottom that says either "all the information about vaccines that we get comes from websites that promote subjects that are considered to be pseudoscience and/or conspiracy theories" or "all information we get about vaccines are from sources that are not considered to be legitimate medical and/or scientific sources" or "it is against professional medical and scientific opinions that a person should not vaccinate their children, as well as may be in violation of the law in some areas" or perhaps even "many scientists consider this picture to be an example of the Dunning-Kruger effect and should be ignored and disregarded".

Regardless of what disclaimer should be placed on an anti-vaccination picture such as this one (or any anti-vaccination picture for that matter) it does show the arrogance within the anti-vaccination movement in that they regard themselves as being intelligent and well educated when it comes to vaccines, when in reality it is often the exact opposite, and that they actually don't know anything about vaccines and simply blindly follow some quack that poses as a doctor or as a medical expert that goes around claiming that vaccines are dangerous and can create all of these health issues in children rather than actually prevent health issues.

Perhaps one more type of disclaimer that should also be included with such a picture should say "all information we have regarding the dangers of vaccines have been discredited by legitimate scientific and medical institutions, or have been shown to be fraudulent."
Posted by The Locke at 2:14 PM