What is a Sheeple? The Conspiracy Theorist definition, and the reality based definition.

Recently on Facebook came across a picture on my feed that, considering the group it was posted in (it was a comedy page) I thought was very... unusual, to say the least.

This is the picture that was posted in said group: 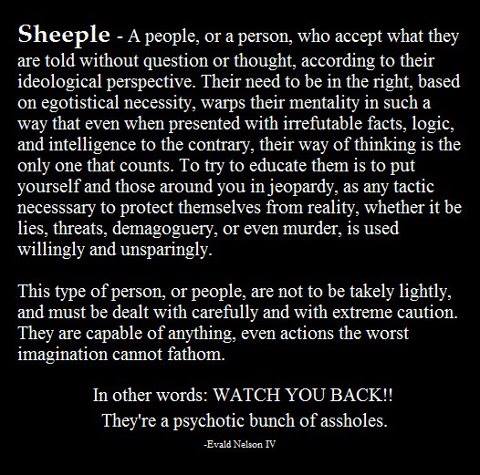 I found this picture a tad bit disturbing, not only because it was posted in a group meant for comedy, but because it clearly showed what at least some conspiracy theorists thinks about people who disagree with them or out right do not believe (and most of the time, for good reason).

In fact this description would be far more accurate if the word "Sheeple" was replaced with "Conspiracy Theorist", as many skeptics would agree that this would more accurately describe many conspiracy theorists (or at least the far more psychotic ones).

Now, a far more accurate definition for the word "Sheeple" would probably be this:

Sheeple - A derogatory word that combines the words "sheep" and "people", and is typically used by conspiracy theorists to try to describe a person whom does not believe in their conspiracy theories (see Skeptic).

Typically the word "Sheeple" is used in arguments over the internet as a blatant insult directed at a skeptic, and is also used as an attempt to intimidate a skeptic into backing down or backing away from an argument concerning a conspiracy theory, and/or even bully them into agreeing with the conspiracy theorist.

Both "Shill" and "Sheeple" are also used by conspiracy theorists as an attempt to end an argument over the internet while trying to save face when it becomes obvious to them that they can not win and are just making themselves appear as someone of either low intelligence and/or questionable sanity.

That would be a far more accurate description for the word "Sheeple". Basically speaking, it is just a typical insult that conspiracy theorists use to try to scare away a skeptic.

The best thing to do if someone calls you a sheeple is to ask them why they think you are a sheeple, and then explain to them why you are not one (this also works if they call you a shill). If this does not work either ignore the accusations, ignore the person completely, or (if you feel like just making them mad) tell them that they are actually conceding defeat in that they actually have nothing left to counter argue, and that they are actually trying to end the argument while at the same time attempting to make it appear as if they have actually won the argument.

Regardless of how you decide to actually handle someone who calls you a a sheeple or a shill, you just have to remember that this is typical conspiracy theorist speak, and that they're only saying it because they're mad that you don't believe them.
Posted by The Locke at 7:42 AM